“But you have to be courageous, my friend, and unafraid of pain. For only through pain will the beauty of the world be revealed.”
― Deborah Moggach, Tulip Fever 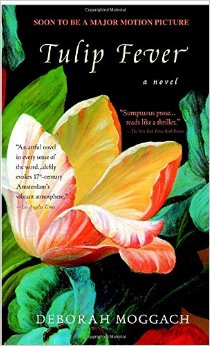 I wasn’t sure what to expect with this book but the trailer caught my eye and I was curious. This is a love story but there is so much more to it. Set in Amsterdam in the 1630s, there is royalty, lies, love, drama, and so many secrets. This is a quick read and I couldn’t put it down.

There is a strong sense of Romeo and Juliet in this story but with even more twists. You root for the good people in the story, like Maria, and even some of the “less than moral” ones. The story is intense in more than one place as the plan begins unfolding for Sophia to get away. And the biggest part of the plan isn’t even revealed until it happens, which makes it even better.

I loved that Maria got her happy ending. I was also a little thrown as to why William left in the first place but then it was all revealed later. And then the whole story and plan unfolds.

This story reminds you that even though people mess up at times, there is always more to a person than one moment or one decision in their lives. The book reminds us that every decision we make has consequences that are far reaching.

This book starts out as “just a love story” but gets more intense later on. I highly recommend it and can’t wait for the movie now!